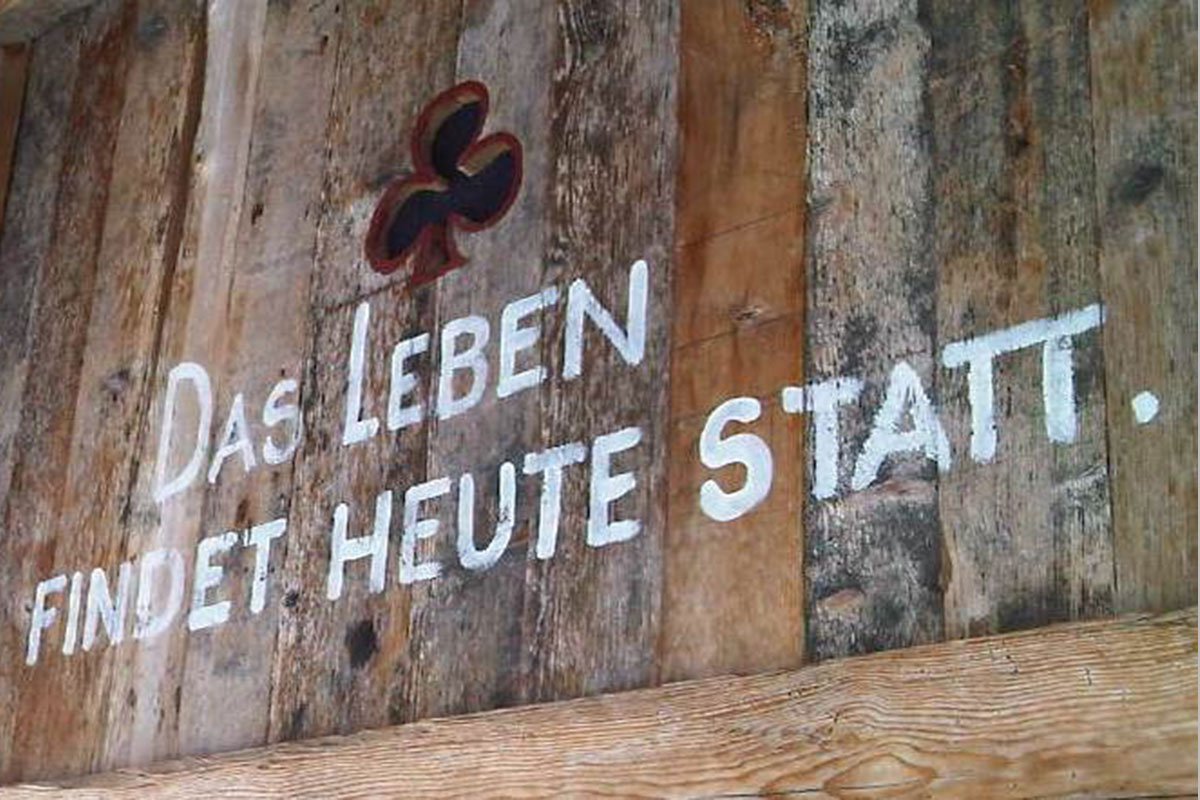 “Life is only Now”

– Reflecting on the week we spent in the mountains of northern Italy (Piemonte) in a little village called “Spoccia”, the word that comes into my mind spontaneously is “nothingness”. It describes an experience I have had last when I was still a child. It belongs to the era before cell phones, I-Pads, and even computers. I remember endless summer holidays, and days that seemed to stretch forever. I can still envision myself sitting in a treetop, picking cherries, dangling my shoeless feet in the air, and my mind being completely “empty”. Of course, even then I somehow knew that a mind is never completely empty, but I noticed that I was somehow able to suspend the “gap” in between two thoughts, and out of curiosity I playfully experienced “expanding the gap” until the next thought kicked in.

Spoccia, our temporary home for one week, is a small village of only 45 remaining inhabitants, with no access to internet, but surrounded by a breath-taking scenery of mountains, woodland, and river streams, that rose after heavy rainfalls at night, filling up the basins in the valleys and transforming them into rock pools of crystal clear, ice cold water, deep enough for us to emerge our hot and sweaty bodies into after long hikes along the rocky paths up and down the mountains.

Despite the incredible scenery and stunning views, after a couple of days we began to notice that we hardly ever saw another human face on our daily tours. Instead we came across hundreds of geckos, which seamlessly disappeared into the wilderness before we even came close enough to properly see them. Whenever we emerged out of the forests and crossed one of the abandoned alpine pastures, we listened to the chirping of the crickets, and watched their chaotic escape hops in between our booted feet. Some of the numerous spring basins were inhabited by slick eel-like creatures that suspended their snake-like bodies in the water, wearing a yellow pair of “sunglasses” around their eyes, as if to contain a warning for the children (and the nosy dog) to keep sufficient distance. And as soon as we stepped out of the shaded woods into the bright sunshine of the day we found ourselves surrounded by all kind of winged creatures dancing in the sunlight as if rehearsing a ballet in a fast-paced performance for our eyes too lazy to follow in its entity.

Once during the week we heard a bell-like tune emerging from the valley, which gradually came closer and finally reached the foot of our little village. Minutes later a unique and colourful procession of the apparently “locals” made their way down through the village and towards the vehicle. The younger ones accompanied the elderly people, and smaller children happily ran ahead towards what turned out to be the weekly supply of local produce, like cheese, vegetables, and fruit. Doors and rear flaps were opened, lids were removed, and within minutes the van was transformed into a mobile market stall in front of which the community gathered in a waiting queue, happily laughing and chatting and greeting each and every new arrival. Nobody seemed to be bothered by the slow-paced process of choosing every single item carefully, prodding and probing of the skins to determine the perfect state of ripeness, and carefully having them handed over one by one. Just being part of this experience was a masterpiece of practicing (mindfulness) equanimity and abundance of patience. The longer I had to sustain the wait, the more frequently I found myself checking my watch, nervously moving from one foot to the other, audibly releasing a sigh, and blatantly eyeballing the back of the person in front of me in a desperate attempt of letting them miraculously disappear. When it finally was my turn I was struck by the friendliness and generosity with which I was handed over my purchase – a melon (“meloni superiori”), a bunch of green grapes, bright red and of course spotless tomatoes, a bunch of green leaves (“rappa”), and a handful of apricots that were dripping with juice, and that were so irresistible that we ate them all up before they even made their way back to our small kitchen. And whether it was the sweetness of the fruit, or the open-heartedness of the smile  I was greeted with, suddenly all the tension and impatience I had experienced before just melted away, and them moment turned into something so honest and pure that the only way to describe it was just perfect.

Looking back now, after having lived one week in the little mountain village, what stood out for me, as a truly healing experience was the simplicity, happiness, and the sacredness of smallness  we found in this village we were part of for a week. Waking up with the bell ringing of the church in the morning, and not a single day of having wanted to sleep a little bit longer, as the evening before I naturally would have gone to bad quite early with the fading of the daylight. There simply was nothing to do, or to miss, or to complete anyway. By the time the first rays of sunshine kissed my face, I was usually already awake.

I would then take the dog out into our little garden, and enjoy my first espresso on the little balcony in front of our kitchen. Just sitting there all alone, and taking in the scenery, as if I was looking at a great piece of art, beautifully set in scene. No need to check my Emails. No need to read the news (which would have been filled with horrible incidents happening all over Europe, as it the whole world was going mad). No need for Twitter, or Facebook, or even What’s App. The thought sometimes crossed my mind, that it would have been wonderful to share this experience with others. But then I looked at it again with different eyes, and I realized that however I would have tried to capture it, it would have lost its uniqueness, and preciousness, and grandness that only belonged to that present moment, seen through my individual eyes.

And then on one of our walks we found the swing. Someone had set it up high in the mountains on one of the most prominent branches of an old oak tree. A simple but genius construction of a steel rope strung around a wooden log, just big and efficient enough for even a grown-up to safely sit on and swing. Some of the earliest and happiest memories I have from my early childhood are those of swinging. I used to throw myself on anything that would produce a swinging motion. And my father was equally inventive in attaching a think rope with a knot tied to its end to anything that could hold a child’s weight for my sister and me to be entertained us for endless hours and days.

So one by one we took it in turns to climb on that, which almost appeared a “surreal” apparition, and after the first cautious swings slowly gaining more confidence in the supportability of the device, so that in the end we found ourselves swinging higher and higher towards the sky, using the power of our legs and bodies to catapult ourselves in different directions, screaming and laughing with pure joy. It was an amazing experience. Being recklessly free as children are, and to feel that tingling sensation in the stomach that produced those unbridled screams.

And that sweet, fleeting moment of being suspended in the air – that moment of “nothingness” I finally found again, high up in the treetops, just before the up-movement of the swinging action is reversed into a down-movement, which reminded me not just of my early days of childhood, but also of a line in one of my favourite poems:

“The world was made to be free in./Give up all the other worlds/except the one to which you belong./Sometimes it takes darkness and the sweet/confinement of your aloneness/to learn/anything or anyone/that does not bring you alive/is too small for you.” – David Whyte

To read the whole poem, please go to: http://www.onbeing.org/program/david-whyte-the-conversational-nature-of-reality/extra/sweet-darkness/8563